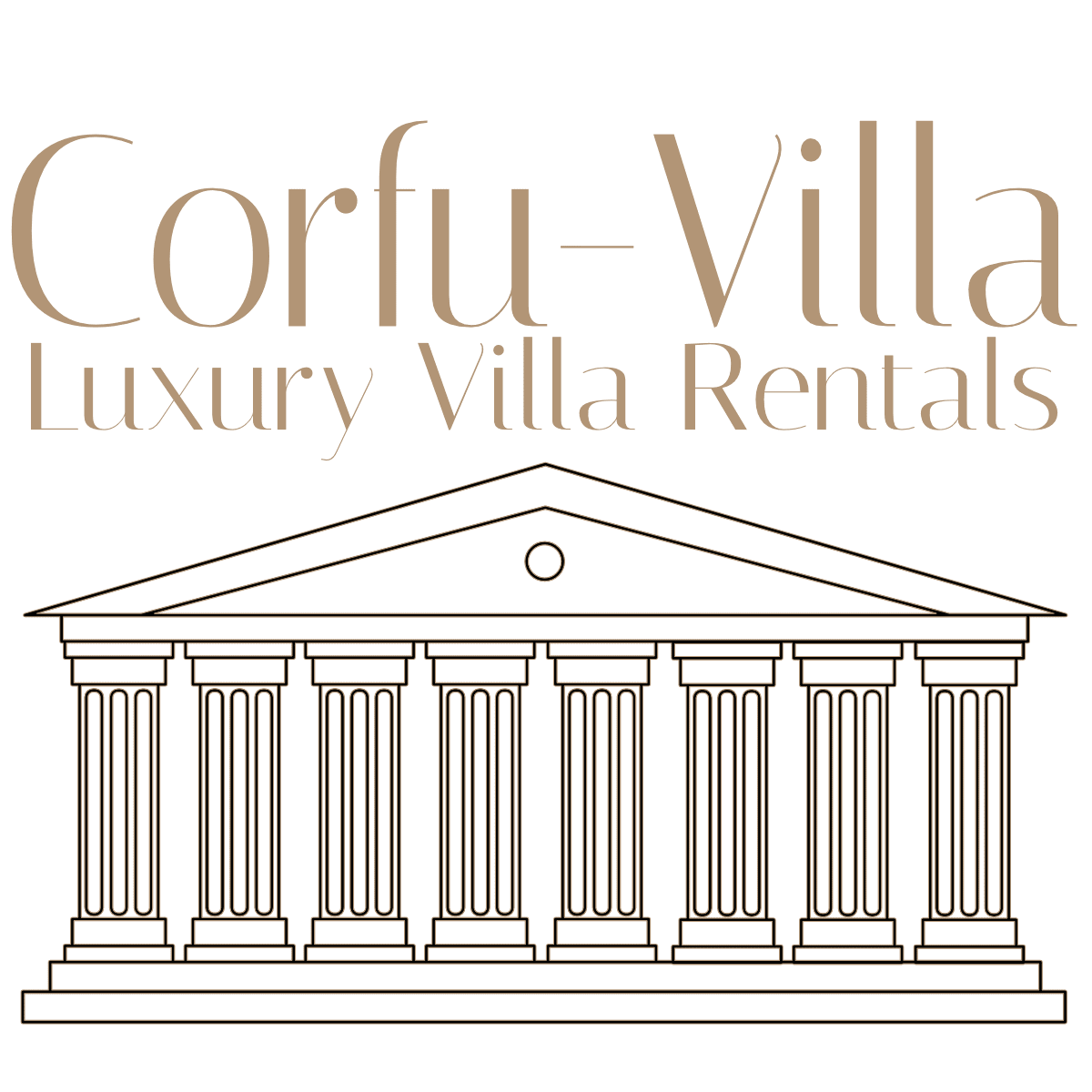 One of the best reasons to explore the island for those on Corfu villa holidays is because of the sheer amount of amazing history on offer.

Many peoples – Greeks, Venetians, Byzantines and more – have called Corfu home over the centuries and the millennia, and they’ve all left their own impression on the island. There are layers and layers of history covering Corfu, with the result being a place that melds Greek culture, Venetian-inspired buildings and ancient castles into something totally unique.

To help you find some of the various historical treasures dotted about the island from the many Corfu private villas on the island, we’ve put together this short guide showing you three pieces of Corfu’s history you need to see.

Sitting atop the highest of peaks on Corfu’s northwest coast – not far from Palaiokastrista – Angelokastro is a stunning example of the island’s Byzantine past.

When choosing a spot for their castle, the Byzantines wanted somewhere that both afforded them near-invulnerability from attack, but that also enabled them to watch over the surrounding areas. Choosing a point over 1,000ft above sea level and right on the edge of a cliff, it’s safe to say they made a wise choice. Despite a number of attempts by various groups to capture and sack the castle, Angelokastro remains unconquered to this very day.

For nearly three-hundred years – from the 13th to the 16th century – the castle served as the de-facto capital of Corfu and, later, as the seat of the Governor of the Ionian Islands. Angelokastro is easy to get to from large villas in Corfu, and it’s one trip you won’t forget.

Not as old as some of the island’s historical sites, Achilleion is nevertheless a fascinating place that offers visitors unparalleled views of the city of Corfu and out over the entire southern portion of the island.

Built in the late 19th century, the intent of the design is to mirror classical Greek architecture with some features contemporaneous to the time. The result is one of Corfu’s most unique and fascinating buildings. Originally commissioned and built by the Empress of Austria Elisabeth of Bavaria, it soon passed into the hands of the German Kaiser after the empress’s passing. Kaiser Wilhelm II made Achilleion his summer retreat, with European leaders travelling to Corfu to meet with the German leader. The architecture and grounds of Achilleion are more than worth seeing, and, as a bonus, you can take in wonderful views encompassing the southern part of Corfu.

As we talked about above, Corfu has layers of history and there are few better examples than Old Fortress.

Occupied and expanded by, in turn, the Byzantines, the Venetians, France, the United Kingdom and Greece, Old Fortress is a piece of Corfu’s history that speaks to the many peoples that have, at one time or another, called the island their home.

Surviving sieges, sea battles, German occupation during World War Two and more, Old Fortress is as much a testament to the indomitable spirit of the people of Corfu as it is to the occupying powers that built, modified and changed the structure.

WHAT OUR GUESTS ARE SAYING...

Villa Andrea was absolutely magnificent with stunning views. The villa is so spacious and the en-suite facilities in the bedrooms are really useful. The outside space including pool and Jacuzzi were brilliant. We loved the local area and spent several evenings at the local taverna in Perithia. There are beautiful beaches both sand and pebbly all within close proximity. We are highly recommend this villa for family groups and friends - we will be coming back!
Chris ButlerLondon
The house was all you said it was and the views were ‘to die for’. We did not expect such a perfect location for our stay in Corfu. The people were so friendly completely different from our experiences in Spain.
Mrs M James. Porthcawl
A short note to tell you that we had the most amazing holiday at Villa Julia; it lived up to all expectations. The bedrooms are a very nice size and comfortable and the pool and outside areas are fantastic!! Great kitchen.
Mr Peter LedgeSouth Africa
I just wanted to say thank you and what a wonderful time we all had and thanks to Dina for all her help too. It’s a beautiful place, a wonderful pool and its a wrench to be back in rainy blighty.
Mrs J DuffEngland
I am just letting you know what a fantastic holiday we had at Villa Andrea, it is the most stunning place, with everything we could have wished for, only problem was we didn’t want to leave. Thank you again, and we look forward to possibly returning there next year.
Gail & Garry Gray
What can I say? Our entire stay was just perfect! The villa was amazing (Villa Julia) both inside and out. It was hard to drag ourselves away from that amazing sea view! We’ve already been talking to friends about a group escape next year!
Mary & PaulCheshire
Just what I needed. A real haven for the stressed out professional, so peaceful and private. We did venture out locally a few times and everything was in easy reach, but you can’t beat sipping a cold beer overlooking those views! We will most certainly back next year!
PaulSouthampton
We booked the Villa Andrea as a family celebration for our 40th wedding anniversary and bought the whole family along with us. The adults loved the peace and the kids loved the pool! The chef was amazing and cooked us a fabulous meal and the maid service meant I didn’t need to lift a finger. Total bliss! Thank you Corfu Villas for making our stay so special.
Stephanie, Alex & KidsHouston, Texas
I’ve stayed in many so-called luxury villas over the years but when Corfu Villas say luxury, they mean it! The bedrooms were huge, light and airy with amazing views and it was lovely to wake up and enjoy the quiet solitude that we’d all be craving after a challenging few months. We can’t wait to return.
StuartManchester
The villa was just beautiful and so well maintained, I spent hours just exploring every nook and cranny. The sun terrace was a great spot for a big family breakfast and we ate dinner there most nights the weather was so good. The kitchen was well equipped and had everything we needed for a really enjoyable stay.
Sharon & FamilySalisbury
Loved it, loved it, loved it! Even our grumpy teenagers were overwhelmed when we arrived after a less than smooth flight from Manchester! A great spot for some quality family time and much needed R&R.
NigelBlackburn
I’ve never written a review about accommodation before, but I couldn’t not get in touch to say how much we enjoyed our week long stay at Villa Julia last month. It’s everything we wanted in a villa and so much more, and that view! Thank you so much, we’ll most definitely be back!
MarthaPlymouth
Thank you for going above and beyond for us when we stayed with you back in August, when our original villa cancelled on us last minute because of water issues your team pulled out all the stops for us and provided us with an amazing villa that was far better than the one we’d previously booked! Great location, gorgeous villa and amazing customer service. Thank you!
Corfu ChillersLondon
Words can’t express how much we loved this villa! It was perfect for my 50th birthday getaway with the girls and we felt like film stars with our private chef and maid service. We can’t wait to come back again with our families and have a few after dinner drinks on the sun terrace.
Darren & LizNewcastle
We were all so impressed with the villa that we are planning to book again with you next year. The villa is perfect for a larger family that lives in different parts of the UK and it was great to get together in such a gorgeous location. We’d love to do it again sometime and will be in touch.
Damien, Lauren, Michael, Phillip & LisaUK
Previous
Next

If you have any queries at all please contact us and we will be sure to respond within 24 hours. If you would rather discuss your requirements over the phone you can call us on the numbers below.